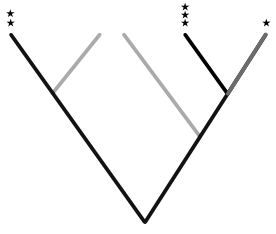 Comparisons of microbial communities are often made using measures of alpha and beta diversity.

We developed a new family of measures interpolating between traditional phylogenetic diversity (PD) and an abundance-weighted generalization, and compared them to extant alpha diversity measures. Spurred on by the recent publication of the generalized UniFrac framework (Chen et. al. 2012), we decided to write up the results.

In applying these new measures to three microbiome datasets, we find something interesting: phylogenetic and taxonomic measures perform consistently better than OTU-based measures in both predicting dysbiosis and differentiating between development stages. This is despite the fact that OTU-based measures of alpha diversity are the dominant way of assessing diversity in human microbiome studies. Our new “balance-weighted phylogenetic diversity” (BWPD) measures perform quite well, especially with an intermediate exponent, similar to the result of Chen et al.

Overall, we suggest using abundance-weighted phylogenetic diversity measures to calculate alpha diversity. Why not give ours a spin? BWPD and other phylogenetic measures are implemented in guppy’s fpd subcommand, and the paper is up on arXiv.