How did SIVcpz vif come to be? 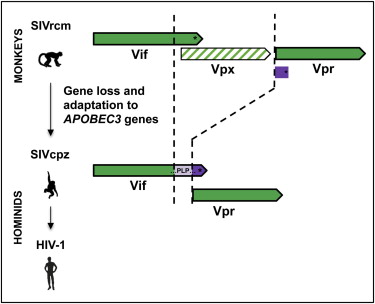 Lots of folks know that HIV-1 in humans came from the chimpanzee Simian Immunodeficiency Virus (SIVcpz). However, before coming to the FHCRC I didn’t know that SIVcpz was itself a result of a complicated set of cross-species transmissions and recombinations. We got involved in this work about a year ago when Lucie Etienne, a postdoc from Michael Emerman’s lab, came over and said that she wanted to figure out how a region of the SIVcpz genome came to be (Lucie did some really nice work for her PhD characterizing SIV infections in wild primates). A little background: vif and vpx are SIV genes that oppose the host defense factors APOBEC and SAMHD1, respectively. The main result of the paper (PDF) is shown in the diagram to the right: SIVcpz sacrificed the ability to oppose SAMHD1 through an out-of-frame recombination in order to be able to be able to oppose chimpanzee APOBEC with a novel vif gene. That’s pretty neat! We couldn’t figure out where that segment with the PPLP motif might have come from though– and we looked in a variety of viral, primate, and other genomes. Lucie was great to work with, and Connor did his usual kickass job with his parts of the analyses.